The Highgate Vampire was a media sensation surrounding reports of supposed supernatural activity at Highgate Cemetery in London in the 1970s.

The most thorough account of the story is given by folklorist Bill Ellis in the journal Folklore.​

A group of young people interested in the occult visited the cemetery in the late 1960s, a time when it was being vandalised by intruders. 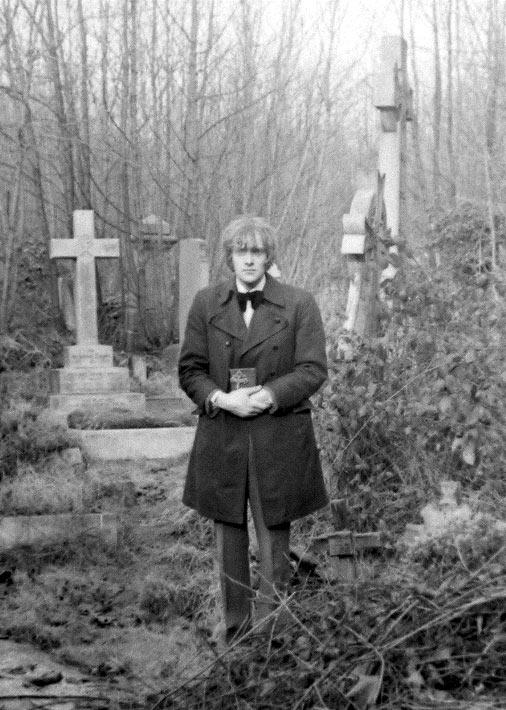 According to a report in the London Evening News of 2 November 1968:​

On the night of Halloween 1968 a graveyard desecration by persons unknown occurred at Tottenham Park Cemetery in London. These persons arranged flowers taken from graves in circular patterns with arrows of blooms pointing to a new grave, which was uncovered. A coffin was opened and the body inside "disturbed". But their most macabre act was driving an iron stake in form a cross through the lid and into the breast of the corpse.​
Click to expand...

Though the identities and motivations of those responsible were never ascertained, general consensus at the time linked the desecration to events surrounding the Highgate Vampire case.

Then, in a letter to the Hampstead and Highgate Express on 6 February 1970, David Farrant wrote that when passing the cemetery on 24 December 1969 he had glimpsed "a grey figure", which he considered to be supernatural, and asked if others had seen anything similar.

On the 13th, several people replied, describing a variety of ghosts said to haunt the cemetery or the adjoining Swains Lane.

These ghosts were described as a tall man in a hat, a spectral cyclist, a woman in white, a face glaring through the bars of a gate, a figure wading into a pond, a pale gliding form, bells ringing, and voices calling.

Sean Manchester claimed the figure was a vampire and the media quickly latched on, embellishing the tale with stories of the vampire being a king of the vampires, or of practising black magic. The ensuing publicity was enhanced by a growing rivalry between Farrant and Manchester, each claiming that he could and would expel or destroy the spectre.

Manchester declared he would hold an exorcism on Friday 13 of March 1970.

ITV interviewed Manchester, Farrant, and others who claimed to have seen supernatural figures in the cemetery.

These were broadcast on ITV early on the evening of the 13th; within two hours a mob of 'hunters' from all over London and beyond swarmed over gates and walls into the locked cemetery, despite police efforts to control them.

Some months later, on 1 August 1970, the charred and headless remains of a woman's body were found not far from the catacomb.

The police suspected that it had been used in black magic.

Farrant was found by police in the churchyard beside Highgate Cemetery one night in August, carrying a crucifix and a wooden stake. He was arrested, but when the case came to court it was dismissed.

A few days later Manchester returned to Highgate Cemetery. He claims that this time he and his companions forced open the doors of a family vault (indicated by his psychic helper).

He says he lifted the lid off one coffin, believing it to have been mysteriously transferred there from the previous catacomb. He was about to drive a stake through the body it contained when a companion persuaded him to desist.

Reluctantly, he shut the coffin, leaving garlic and incense in the vault.
​

There was more publicity about Farrant and Manchester when rumours spread that they would meet in a "magicians' duel" on Parliament Hill on Friday 13 April 1973, which never occurred.

Farrant was jailed in 1974 for damaging memorials and interfering with dead remains in Highgate Cemetery—vandalism and desecration which he insisted had been caused by Satanists, not him.

Farrant and Manchester wrote and spoke repeatedly about the Highgate Vampire, each stressing his own role to the exclusion of the other.

Each attempted to control the narrative around the Highgate Vampire, resulting in ongoing animosity and rivalry between the two.

Their feud continued for decades, marked by insults and vindictiveness, until Farrant's death in April of 2019
​

I think the stake through the heart is a fairly recent creation. In olden times they used to put a brick or large stone in the mouths of those suspected of being vampires. graves were desecrated just to carry out this task.

Interesting story. Highgate always had some very sinister tales attached to it.

Lots of weird creepy shit goes on, supernatural who knows, but I thnk modern society has been led to look away from this and consider it all a myth, it is not.
D

Porphyria I think is the disease that is helped by blood transfusions, prior to transfusions drinking blood helped. One symptom is an aversion to sunlight.

Outside of that we now know that transfusions of youthful blood can help reverse or treat ageing diseases in people.

There's also the adrenochrome legend, which still persists despite the best efforts to quash it.

Consuming the blood of the youth has been proven to have major benefits. We are only hearing about it now, but it has probably been known for centuries.

It has probably gone underground, literally.