Tales of the Unexpected

Each episode told a story, often with sinister and wryly comedic undertones, with an unexpected twist ending.

Every episode of series one, eight episodes of series two, and one episode of series three were based on short stories by Roald Dahl collected in the books Tales of the Unexpected, Kiss Kiss, and Someone Like You.
​
The series was made by Anglia Television for ITV with interior scenes recorded at their Norwich studios, whilst location filming mainly occurred across East Anglia.

The theme music for the series was written by composer Ron Grainer.​

Dahl introduced most of his own stories himself, giving short monologues explaining what inspired him to write them.

Unlike other horror anthologies such as The Twilight Zone, Tales of the Unexpected features few supernatural, science-fiction, or fantasy elements and instead takes place in entirely realistic settings (exceptions include the series-one episode "William and Mary", the series-two episode "Royal Jelly", and the series-four episode "The Sound Machine").

Although many of Dahl's stories are left open to the reader's interpretation, the television series usually provided a generally accepted conclusion.

This is exemplified in the story "The Landlady", the written version of which only hints at character Billy's fate, while the televised adaptation has a more resolved conclusion.

Later episodes were set in different locations outside the United Kingdom, with many being made in the United States. 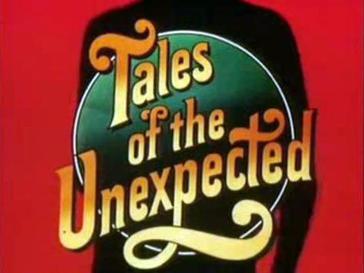