A new report describes roughly a dozen UFO sightings by the Canadian military - with some dating back 70 years, highlighting the strange phenomenon ahead of a highly anticipated government report in the U.S.

The Canadian sightings took place at military bases dating back to 1950, and were uncovered by Vice through access to information requests, public records, and interviews.

It comes as the Pentagon prepares to deliver its report on UFO sightings to Congress later this month, with some lawmakers pushing for the information to be made public. 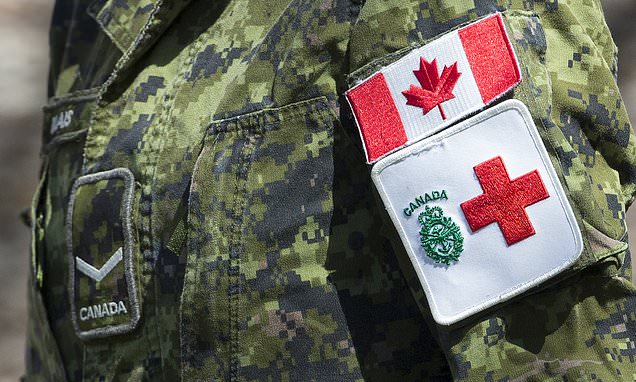 Canadian military has reports of UFO sightings dating back 70 YEARS

The Canadian sightings took place at military bases dating back to 1950, and were uncovered by Vice through access to information requests, public records, and interviews. 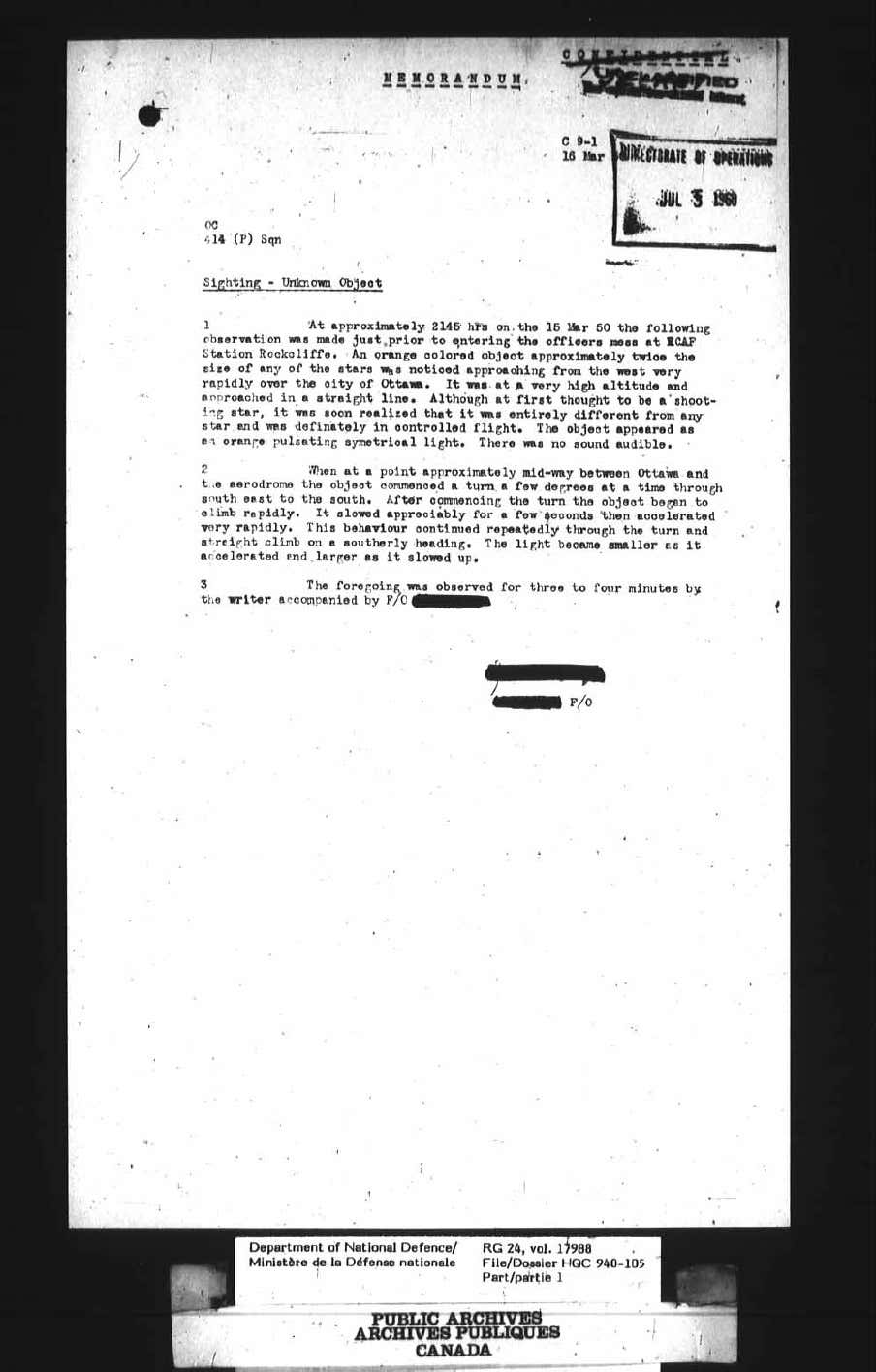 A selection of the reports


On April 12, 1952, two officers at CFB North Bay spotted something something 'apparently round' like 'an amber traffic light'.

They said it moved at a 'very great rate of speed—comparable to twice the speed of an F-86' jet fighter, and then 'skidded to a stop, reversed direction and disappeared… at a greater rate of speed on reversal than on approach.'

In another incident from November 1967, a sergeant at CFB Moose Jaw reported 'a very bright light' at an altitude of 3,000-4,000 feet with 'what appeared to the observer as small moons arcing the outer perimeter of light.'

The witness said that as the object began to move 'it appeared to the observer to be elongated in shape' before quickly soaring upward.

THERE WAS A REPORT AT RCAF Station Falconbridge Military base in the 70s .Canada’s Department of National Defence was still very much involved in UFO sightings in the 1970s, as the following episode demonstrates. The National Enquirer’s headline for August 1976 screamed "Air Defense Chiefs Admit: We Tracked UFO on Radar and Scrambled Fighter Jets to Intercept". The tabloid told the story of what happened eight months earlier, on the night of November 11, 1975.

The Enquirer article was essentially correct. Witnesses included police officers, military personnel at the NORAD radar base in Falconbridge, Ontario, and numerous civilians. It was one of the few incidents to include simultaneous radar, visual, and photographic evidence.

Reports of strange lights were called in to police headquarters at about 3:00 a.m. by people in Sudbury, Ontario, some 15 miles southwest of the Falconbridge radar site. The lights were low in the sky but suddenly shot straight up. Two police officers saw four objects, three of which appeared to be hovering while the fourth was moving in a kind of circular motion. Two other officers spotted an object through binoculars. They said it was shaped like a cylinder and they observed it until 7:00 a.m. Other officers also reported bright objects.

At the Falconbridge radar station the commanding officer, Major Robert Oliver, and five others saw three objects. These objects were observed through binoculars but no identification could be made. Oliver advised the Enquirer that he believed both DND and the US authorities investigated the more serious reports like this one.

Two jets were finally scrambled from Selfridge Air Force Base in Detroit, Michigan, at about 10:45 a.m. These jets found nothing. Captain Gordon Hilchie, Director of Public Affairs for the 22nd NORAD Region Centre at North Bay, stated that the objects were tracked 25 to 30 miles south of the radar site at Falconbridge. They shot up from 26,000 feet to 45,000 feet, stopped for a period of time, and then shot up to 72,000 feet.

The North Bay Nugget also reported the sighting and included a photograph taken by a staff reported. Colonel GW Patterson, Chief of Staff of Operations for the Air Defence Group and Deputy Commander of Operations for the 22nd NORAD Region Control Centre, was interviewed, along with Lieutenant Colonel B Wooding, Director of the 22nd NORAD Region Control Centre. They were asked why radar doesn’t always pick up UFOs. Wooding explained that many factors come into play. For example, if the object is too low, or is moving too quickly or too slowly, it may be missed. If it is constructed out of non-metallic material or material that absorbs a radar signal rather than reflecting it back, the object will go unnoticed. Also, radar is tuned to specific frequencies. Search radar is designed to look for aircraft while height-finder radar is designed to determine the height of objects. In addition, radar can be fooled by flocks of birds or temperature effects, which can mask a UFO or appear as a trace which might be interpreted as a UFO. This could explain why not all of the radar installations picked up the objects over Sudbury and those that did might have been fooled.

In his book, Skunk Works, Ben Rich reveals some of the secrets behind stealth technology and the Stealth Fighter. His revelations provide another reason why flying saucers cannot always be detected on radar. He notes that the flying saucer shape is practically the ultimate in low observability. That is, due simply to a saucer’s shape, the laws of physics make the craft difficult to detect on radar. Rich adds that his crew at Skunk Works, for the uninitiated, was the name given to Lockheed Martin’s covert design and development section. It developed many black programs secretly funded under the guise of other names and other programs.

As for the visual sightings at Sudbury, Patterson added that strange atmospheric effects could have caused the illusion of UFOs in a way similar to the effects of the Northern Lights. He also mentioned effects from lenticlar clouds, which can sometimes magnify bright stars or planets. Ian Halliday of the National Research Council was consulted and noted that the effects observed could have been due to unusual atmospheric phenomena. Observers might even have been watching aircraft but heard no sound due to atmospheric effects which would carry the sound upwards and away from the ground. Halliday also spoke of how the planets might be misinterpreted under certain conditions, and finally said that observers estimating distances and heights could easily be mistaken, if they had no point of reference,

In 1995 a file marked "Secret" was declassified for this author. It contains pages from the 22nd NORAD Region Air Traffic Control Log Book, which gives a blow-by-blow account of what was reported that morning in 1975. The log book corroborates the stories in the papers and contains a few extra noteworthy details. All times are given in Greenwich Mean Time (GMT), as recorded in the file.

On November 11, at 10:40 GMT, the 22nd NORAD Region received a call about two UFOs being chased by the Sudbury police. Was air traffic control picking them up on radar? At 11:18 GMT Canadian Forces Base Falconbridge called about a UFO over the base and another one reportedly over the Ontario Provincial Police building in downtown Sudbury. The UFO over the base was described as resembling a gem with colored lights around it.

At 11:47 major Oliver from Falconbridge called in. He stated that between 11:15 and 11:29 GMT he saw two UFOs with brilliant lights. One was at 200 degrees from Falconbridge and the other at 180 degrees and much further away. Not reported in the press was that Oliver took three snapshots with a Brownie camera. It is not known what became of those photographs or whether they even turned out. He also observed the closer object through binoculars. It was "rising vertically at tremendous speed…" The height-finder radar picked it up first at 44,000 feet and then at 72,000 feet. This means the altitudes were not guess by the observers, as they had been reported in the media, but were in fact recorded by the radar. The object was described as being circular, well lighted, and with two black spots in the center. By 13:24 GMT, radio station CKSO called requesting information about the UFOs but was given no comment as to any specific details at that time.

At 17:27 GMT Patterson, who was at NORAD Headquarters in Colorado, was advised that the object was still in view and that Selfridge Air Force Base had been notified. At 17:50 GMT two F-106 aircraft from the American base were scrambled. At 18:53 they reported that searches had been made from 8,000 to 30,000 feet with no contact with any objects.

At 07:10 GMT on November 12, Master Corporal Kreutz advised that two police officers and one other witness in the area of the base were now observing the objects, which were a pulsating, brilliant white and moving in a jerky fashion at cloud height. A report was going to be sent to National Defence Headquarters in Ottawa. The log entry ends here as far as the UFO report is concerned.

One thing that is not clear from all the accounts is whether the objects were in view at the same time as the jets. The jets searched an area up to 30,000 feet, yet the objects were last reported at 72,000 feet. While the jet’s radar can extend beyond the altitude capability of the airplane, there is no indication of the range actually used. That nothing was reported by the jets is not an indication that no physical objects were present. The reports were consistent among all ground observers, and the simultaneous visual and radar corroboration of the rapid ascent of the object would tend to rule out planets, stars, and temperature inversion effects. The only certainty is that something highly unusual occurred over the Sudbury skies that morning.

Why would Aliens be Half Hiding from Us ? ?

Would they Not just become “ Celebs “ and have everyone kissing their ass's
Last edited: 4 June 2021

clarke-connolly said:
Why would Aliens be Half Hiding from Us ? ?

Would they Noy just become “ Celebs “ and have everyone kissing their ass's
Click to expand...